15 Times Women Had Each Other’s Backs

These days, the Internet functions almost entirely on outrage and snark. But once in a while it’s healthy to highlight the more positive things in life. Today, we’ve got tales of women who went above and beyond the call of duty to help their fellow woman out–and in some case, they were total strangers! Get your smiles ready.

1. This would make someone’s whole month! 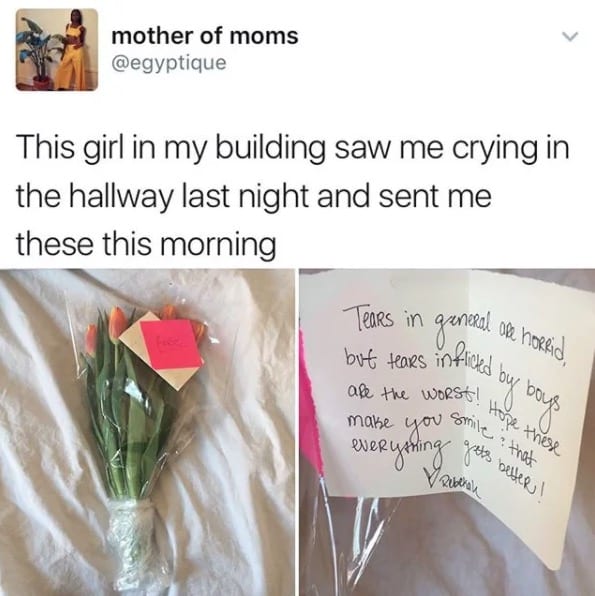 My grandma is in Mexico taking shots with random girls on the beach and posting pics of it with captions like they’re bff’s.. pic.twitter.com/SA47BMUsX3

i had no money so my friends bought me food and clothes, i love my friends ? @skylabain @hahn_solo25 pic.twitter.com/IeDHAyVXKr

my best friend n I haven’t seen each other in 3 months so we made powerpoint presentations to update each other on our lives pic.twitter.com/3EjErHpl2i

6. A true friend will help you pull a scam…

i’m such a good friend pic.twitter.com/oSzImM82u6

7. …especially in matters of love.

the girl in front of me in the lecture was watching grey’s anatomy, looked back and saw me staring so she put on the subtitles.

10. You might have a best friend, but are they collage-worthy?

This is just so beautiful pic.twitter.com/7QdNqZ1Coz

So my boyfriend has a identical twin brother and someone thought my boyfriend was cheating on me but it was really his brother and his girlfriend ??? thanks for having my back though girl ✊️ pic.twitter.com/kp3d4D6dmZ

I asked a girl what lipstick she was wearing in a club bathroom and she pulled it out and applied it on me so nicely I love girls https://t.co/QnY9LukDBF

the team helped me out with good lighting to take a nice pic of me eating pizza pic.twitter.com/dZdYa11Yep

This is what true friends are pic.twitter.com/ot49xtESuF

15. And finally, I can’t stop smiling about this one.

15 People Who Are Clearly Living with Monsters
Here’s Why You Shouldn’t Force Kids To Hand Out Hugs This Holiday Season
This Guy Photoshops Himself into Kendall Jenner’s Photos and the Results Are Amazing
Grab Your “Harry Potter” Sorting Candle, Just in Time for Halloween
13 Funny Tweets People Shared
15 Uncomfortable Cartoons About Weddings That Are Too True