Pretty much all of us struggle with accepting our bodies as they are. It definitely doesn’t help when society and the media constantly reinforce the idea that there’s only one type of body that’s desirable, and if you don’t have that body type, you should try to “fix” it. So when someone steps up and encourages a message of self-acceptance, we love it, and we wanna tell you about it.

Meet Chidera Eggerue. She’s a 23-year-old blogger from the UK who goes by the name “Slumflower” online. She also has what she calls “saggy boobs.” And she’s here to tell you that saggy boobs are awesome.

how to style saggy boobs: a tutorial

step 2 – remember not to care. we are all dying. #SAGGYBOOBSMATTER pic.twitter.com/tnqM6ttl1O

As Eggeru told Buzzfeed, acceptance her body has been a struggle in years past, particularly when shopping for a bra. “The packaging would always have a picture of a white woman with perky boobs, yet when I’d try on the same bra in my correct size, my boobs just wouldn’t look like the model pictured.”

After years of putting up with ill-fitting bras and demoralizing marketing, Eggeru decided to ditch bras altogether as a way to celebrate her body just how it is.

The next time a man asks you why your boobs are saggy, ask him why his balls are saggy.#SAGGYBOOBSMATTER pic.twitter.com/Gl6LIMupYu

Then, once Eggeru had cultivated a large online following, she started a conversation about body positivity, under the hashtag #SaggyBoobsMatter. It was a bit tongue-in-cheek, but the message was plenty serious, and it promptly went viral.

While the reaction to her message has been mostly positive, there has been some negativity, with some people mocking her appearance, and others telling her to put a bra on. Even Don Jazzy, a successful music producer from Nigeria,  belittled her to his three million followers.

Eggeru says this is exactly why she spoke up in the first place.

“By force, we will all have to learn that the only way to normalise something is to see it repeatedly. So if you have an issue with saggy boobs, you have to ask yourself why a person’s body offends you,” she said.

But plenty of women have praised Eggeru, whose message of encouragement has helped them in their own struggles, like this woman who wrote to Eggeru on Instagram. 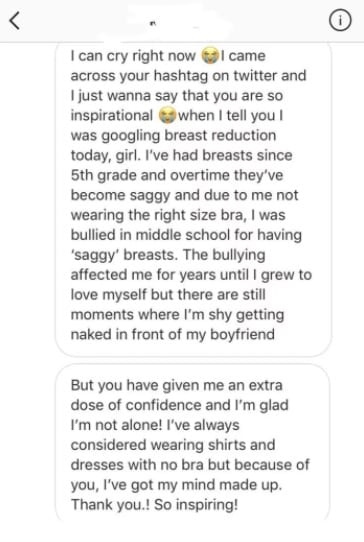 It’s that positive feedback that has encouraged Eggeru to continue spreading her message, that saggy breasts are worth celebrating just like any other. And what ultimately matters isn’t how someone looks, it’s their character. Hear, hear.

15 Spot-On Memes About Nurses
13 Of The Most Creative Gender Reveals
15 Funny Tweets from Last Week
Putting Your Christmas Decorations Up Early? Turns Out You’re Not Crazy!
Genius Imagines What Was Happening Behind The Scenes Of Album Covers
15 Posts About Disney That Are Probably Going to Screw with Your Head