When a bride-to-be is considering who should be her maid of honor, conventional wisdom says that it should be her oldest and dearest friend. Usually it’s pretty obvious who that person is, but in case it’s not, this story gives us a handy criterion: “If she pranks your wedding photos and you still want to be her friend, she should be your maid of honor.”

Rebecca and James Foster of Alberta, Canada, were recently married, and naturally Rebecca’s maid of honor Sharilyn Wester was a big part of the celebration. The wedding photographer, Ashley Hempel, asked Sharilyn to help out with the veil toss portion of the couple’s photoshoot. That’s when Sharilyn saw an opportunity for an excellent photobomb. 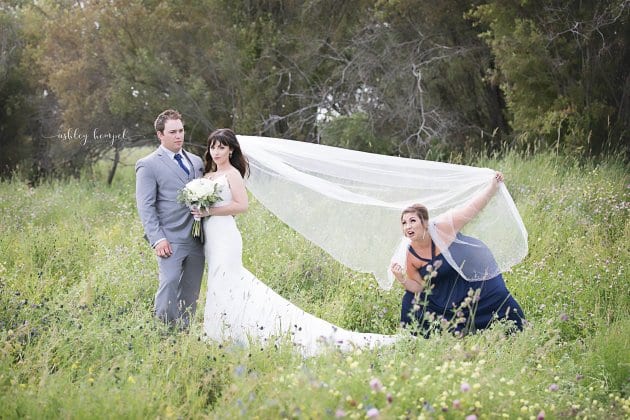 Solid photobomb! But Sharilyn didn’t stop at just one pose. 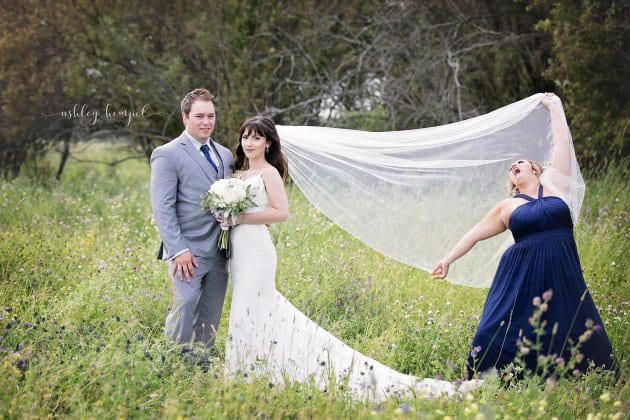 This one is my favorite of the bunch: 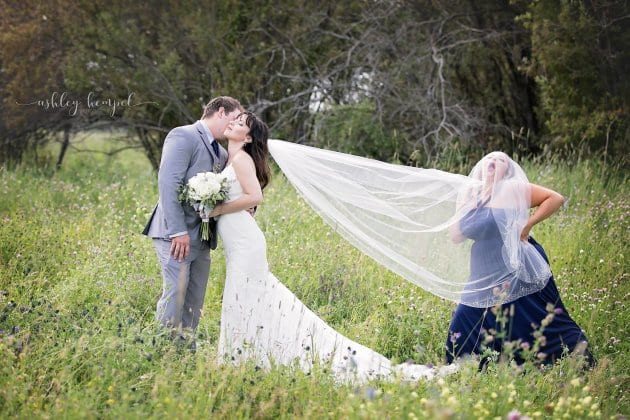 “But wait!” you might be saying. “I can see that the bride’s back is turned, making it difficult for her to notice the photobomb, but what about the husband? He seems to have a clear line of sight on the prank. Why isn’t he intervening?!” Good point! In fact, James was in on it.

“The groom had no idea what we decided to do, but once we started acting goofy, he played along and was laughing,” Sharilyn told Huffington Post Canada.

It sounds like everyone else appreciated the break from a grueling wedding photoshoot.

“We had been outside in the 36C [96 Fahrenheit] weather in the sun all day in formal attire for hours, and we figured we could try and perk everyone up and make them laugh,” Sharilyn said.

As a wedding photographer, Ashley Hempel’s job is to not only record an event, but also to capture the personalities and relationships of everyone involved. And in this case, Sharilyn gave her a lot to work with.

“They are hilarious,” she said of Foster and Wester. “They have each other’s backs — constantly striking poses and goofing off even during the getting ready photos,” Hempel said.

“I think they’re the type of friends who will be 75 at an old folks’ home pantsing the orderlies,” she added with a laugh.

We should all be so lucky to have a friendship like Rebecca and Sharilyn’s.

This 1 Easy Trick Stops Tantrums in Their Tracks. Every Parent Needs to Know!
This Mom Slams ‘Parents’ Magazine For Offering Advice On Waxing A Preschooler’s Upper Lip
Now You Can Ruin Your Cat’s Month With A Dinosaur Haircut
17 Hilarious Photos Every Parent Needs to See
New Study Confirms That Stay-At-Home Parents Should Earn a Significant Salary
Woman Recreates Celebrity Instagram Photos – And the Internet Is Cracking Up