Mommy Wars: Does This Photo Of Chrissy Teigen And Her Daughter Push Your Panic Button?

Ah, the Mommy Wars. I’m not sure there’s anything less appealing about parenting these days than constantly feeling judged by people in real life and on social media. I imagine that goes double or even triple for women who are public figures – and after being shamelessly, well, shamed, for more than a couple of mothering choices, model Chrissy Teigen has to feel the same way.

From deciding to leave her young daughter with a sitter for a date night to something as innocuous as going down a tiny slide, the poor woman cannot catch a break. I guess it works in her favor that she’s one of the most “I-don’t-give-a-crap” women on the Internet. Good for her.

The latest kerfuffle came when she posted a picture of her and her daughter on a small plastic slide, with a caption hinting at the fact that her daughter refused to go down it alone. 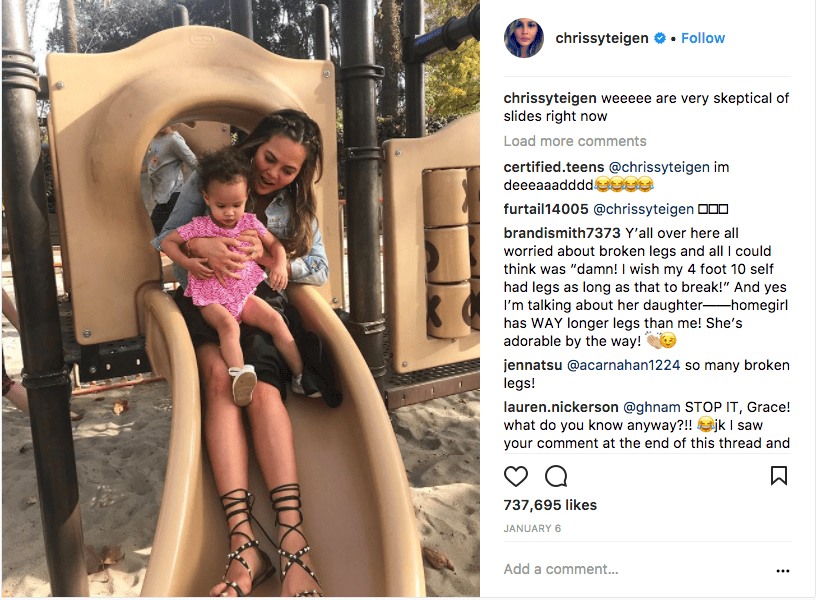 Simple, right? Who could find fault with that?

More than a few people, apparently, and for this first-time mom, the news that going down a slide with your kid is akin to breaking their limbs with a hammer was a shock.

Me? I say people need to calm the hell down. The slide is so small Chrissy’s feet are already on the bottom, so I think we can save the lectures.

Also, we can save the lectures because none of us are her friend, partner, parent, or pediatrician. So butt out.