Parenting while sick is, hands down, one of the worst things about having kids. When you’re single and you feel like crap, you can get under a blanket, turn on Netflix, and order food all day and night. But when you have kids? Not only do they not understand other people’s feelings, they truly don’t give a sh*t, either.

That said, you have to grit your teeth and do it, because regardless of how you feel, kids can’t take care of themselves. There’s been one time in my (admittedly short) time as a parent when I was so violently ill I couldn’t respond to my kid’s request for attention and I felt terrible about it afterward.

In this Reddit post, though, a “working” dad took issue with his sick wife not paying enough attention to the kids after he’d taken charge of them all day because she wasn’t feeling up to it. 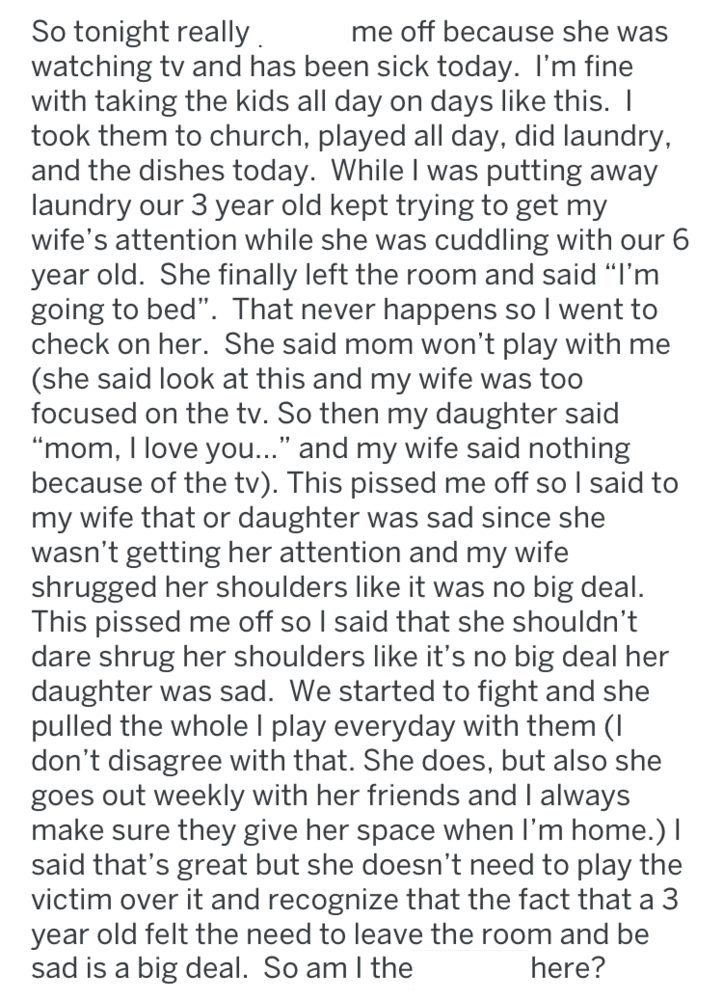 “So tonight really ticked me off because she was watching tv and has been sick today. I’m fine with taking the kids all day on days like this. I took them to church, played all day, did laundry, and the dishes today. While I was putting away laundry our 3 year old kept trying to get my wife’s attention while she was cuddling with our 6 year old. She finally left the room and said “I’m going to bed.” That never happens so I went to check on her. She said mom won’t play with me (she said look at this and my wife was too focused on the tv. So then my daughter said “mom, I love you…” and my wife said nothing because of the tv).

This pissed me off so I said to my wife that our daughter was sad since she wasn’t getting attention and my wife shrugged her shoulders like it was no big deal. This pissed me off so I said that she shouldn’t dare shrug her shoulders like it’s no big deal her daughter was sad. We started to fight and she pulled the whole I play everyday with them (I don’t disagree with that. She does, but also she goes out weekly with her friends and I always make sure they give her space when I’m home.) I said that’s great but she doesn’t need to play the victim over it and recognize the fact that a 3 year old felt the need to leave the room and be sad is a big deal. So am I the a**hole here?”

People had some different opinions on it – some thought he was overreacting and that their 3-year-old would get over it (and probably forget about it) in about 10 minutes. 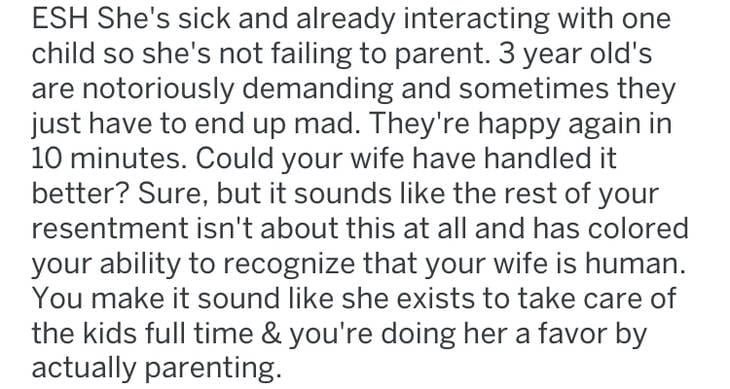 Others thought that, no matter how a person is feeling, they shouldn’t ignore a poor kid trying to say “I love you.” 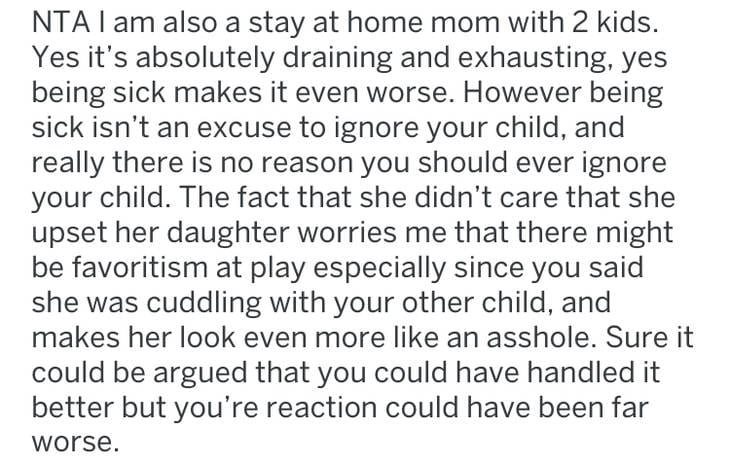 Who do you agree with on this one? I have to say, I’m kind of in the middle but leaning toward “she could have tried harder.”

That said, I wasn’t in her shoes and I don’t know how badly she was feeling…but when I was so sick I had to ignore my kid, no way could I have concentrated on the television, either.

But. You know. Everyone’s different.