Old People PSA: 12 Examples of this Emoji Being Misused in the Most Hilarious Ways

I’m not sure what the age cutoff is for people not understanding emojis – my guess is that it’s perhaps around 55 or 60? But once you meet a person who is confused about what they mean and when to use them, your first clue will be that they don’t understand how to use this guy:

That’s right, even though the “laughing crying” emoji is a favorite across the board, people over a certain age don’t really seem to see him correctly.

Here are 12 people who just really, really should have asked someone younger if they were doing it right before deploying this particular emoji in a text or post.

12. The words and the background just…

When your mom doesn't know how to use emoji correctly. pic.twitter.com/Fc4cwEp70v

when you grandma is still getting the hang of emojis and thinks the laughing face is the crying face… pic.twitter.com/zPJOknDfX6

9. I’m no expert, but I’m not sure you’re praying correctly?

Thoughts and prayers ?? from oldpeoplefacebook

So either my grandma thinks "?" is a crying sad face. Or she's laughing at my broken foot. pic.twitter.com/NnUySsTve1

When ur dad thinks the laughing emoji is crying and tells u they have to put the dog down pic.twitter.com/j4EvqsFPQI

mY AUNT THINKS THE EMOTICON OF THE CRYING LAUGHING FACE IS JUST A CRYING FACE& SHE MADE A STATUS ABOUT HER DOG AND pic.twitter.com/istpaX4HZR

4. TBH a lot of this is confusing.

When Willy Wonka died & your mom doesn't know the different between the laughing & crying emoji pic.twitter.com/xfcafqT1sg

3. Oddly, I think Robin Williams would have appreciated the humor.

MY MOM THINKS THIS EMOJI IS HYSTERICALLY CRYING INSTEAD OF LAUGHING IM pic.twitter.com/lnD2d7wYe1 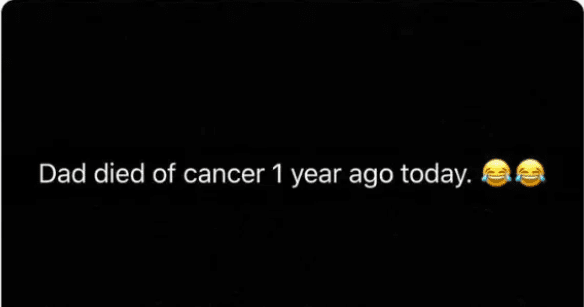 1. Well, if that doesn’t make you feel better I’m not sure what would!

My wee Mum thinks the 'crying with laughter' emoji is just a 'crying' one. At least I think she does.. pic.twitter.com/Zq3T49tD7Q

Now I’m crying laughing, y’all, so maybe they’re not using it as wrong as I’d thought? Hard to say!

Have you ever used an emoji wrong and been schooled? I definitely want to hear about it in the comments!