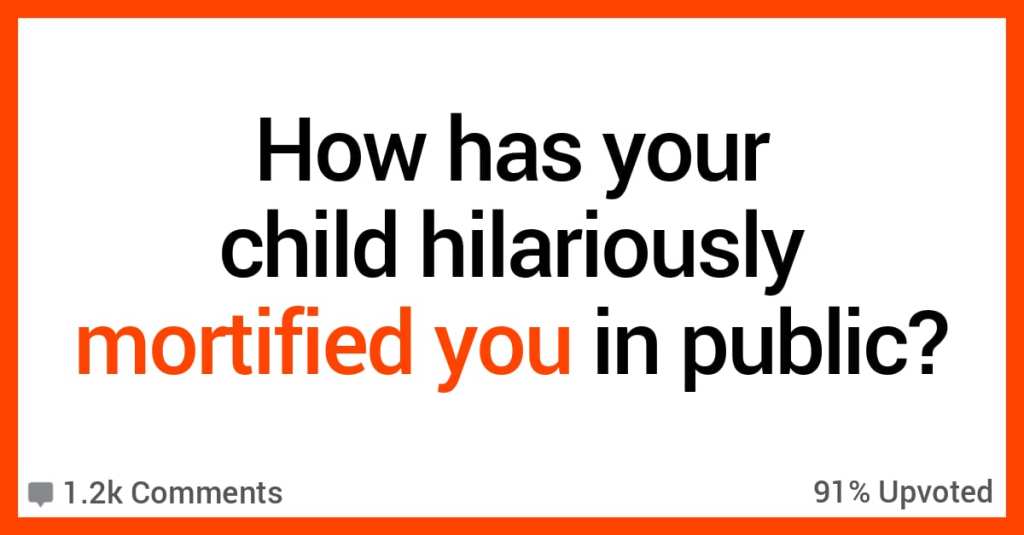 I mean, to be fair, are you even a kid if you don’t make your parents want to crawl under a rock at least a couple of times in your life?

Kids are always learning, they’re super curious, and they’re not afraid to ask questions, and oh, they don’t know what it means to whisper.

All of those factors came together to create these 10 unforgettable moments.

10. Sometimes they don’t even have to speak.

The first thing you do when you walk into Costco is go look at all the TVs you can’t afford. My wife was holding the baby and somehow his diaper slid sideways. He shat and the entirety of it splattered all over the TV aisle in Costco.

Newborn / infant poo isn’t like regular poo … it was like a giant pterodactyl birds**t if the pterodactyl ate mustard and cottage cheese for two days straight.

The Costco employee was super cool about it. Said he has six kids and joked with us while he mopped it up. We still left immediately and were mortified. Three years later and we still see the employee in Costco on occasion . . . we all still joke about it.

Climbed out of public pool, walked into grass, squatted down and peed.

8. That kid is going places.

Not me, but one of my sisters, and her son. He was probably 5ish, and they were at some public festival. There was a small stage in the middle of the festival and it wasn’t being used so a bunch of kids would run up there and be silly, dancing, etc.

My nephew runs up there, and plays around. My sister looks away for a second, and my nephew decides that right then is the time to pull his pants down to his ankles and pee on stage in front of everyone. My sister turned around and tried to stop him but it was too late and he wouldn’t listen.

We have a picture that another one of my other sisters took of my nephew in action, and my sister standing there with her face in her hands as all the other parents look at her disapprovingly. She’s known as the uptight one in the family, which only makes it even better.

7. Not in his cycling outfit, anyway.

When my niece was about four, the family got together to watch a football game. My friend, an avid cyclist, came over to the house to join. He was wearing one of those extremely tight cycling leotards that doesn’t leave much to the imagination. Unfortunately, my niece was right about eye level with his waist. When he said “it’s nice to meet you,” she poked him right in the crotch and asked “what’s that?!”

He didn’t come around much after that.

I was heavily pregnant, due date a few days a way, and went out for a burger and ice cream sundae with my friend. Ordered, then noticed something uncomfortable as I shifted in my seat. I told my friend, “I’m just going to run to the bathroom before our food comes.”

I stood up and my water broke. Quickly sat back down to sort of “cork” the flow and was paralyzed as to what to do. We called over our waiter and I told him my water just broke and we wouldn’t be able to stay for our dinner. He was so excited for me at first, and then as the reality set in of the biohazard mess he was going to have to clean up, I could see his expression shift to being horrified and disgusted, then he quickly tried to pretend to be excited again.

So, I wrapped my friend’s sweater around my waste, and we hustled out without paying as water gushed down the legs of my pants. So gross!!

So, my daughter mortified me in public before she was even born. I hope this is not a foreshadowing of things to come…

5. This one is truly awful.

My daughter was about two and potty training; had just taught her about deciphering public bathroom signs. “This one has a little dress. This is girls. This is where you and mommy go. This one has pants. This is for boys…” etc.

Next week I’m juggling stroller, a six month old, and my toddler, and the moment we sit to eat happy meals my girl has to go. Like now.

We sprint to McDonald’s bathroom, she find the right outer door, walks in, and loses her mind on the person waiting for the next available stall.

She was telling off a bald person. A bald woman. Obviously very sick with cancer/chemo. In a wheelchair. Being pushed by her nurse. Waiting for the handicapped stall.

I was horrified. Apologized profusely. They were thankfully kind, understanding, and actually had a bit of chuckle.

Ahh toddlers. Worst/most awkward wait to get into the handicapped stall (coincidentally also the stall with a diaper changing table) ever.

It still makes me cringe to think of.

Not a parent but the poor woman who was the parent of this child deserves to have the story shared.

I was working at a retail store, and a mom and child come in. Now the store wasn’t big at all, so the dressing room was right behind the check out counter. These dressing rooms weren’t sound proof or anything so sometimes you could hear conversations.

This poor woman takes her young daughter into the dressing room with her to try something on, and a few minutes go by and suddenly this young girl yells as loud as she can “OHMYGOD MOM YOU FARTED!!” I’ve never seen someone dart out of a store so fast.

years ago when my youngest was not quite three, we were at a hotel. I took the kids down to the pool. There was a large number of high school kids there, members of a track team, traveled from out of state for a regional meet.

My kid was too small and too chilly for the pool, so I took him over to the jacuzzi. One of the teens came over…a very tall, slender young man, with dark brown skin. My kid was fascinated…enthralled. At that age he had no filters. He sidled up and began making friends, pointed out that his skin was a different color, asked him how he got his.

When I began to hush my kid the guy laughed and said it was all right, that he was reminded of his younger siblings whom he was missing. The young man was an exchange student from Jamaica, sent to Colorado.

He had just seen snow for the first time. The two of them, being humans together is a good memory.

My daughter loves to complement people. About a month ago we were in the mall with my other kids. I was in line getting food for everyone when my daughter ran up to me and yelled:

“Daddy, I love your penis!”

It was both horrifying and hilarious, though I’m surprised I didn’t get arrested.

My seven year old son was fascinated with the concept of slavery. We tried our very best to explain the horrors, past and present, but he clearly didn’t take to heart our pleas to never discuss it with anyone else but us.

One day, in the bathroom of a restaurant, a very nice, very pretty black woman made the mistake of smiling at him. As I tried to dry my hands at lightning speed, he, clearly trying to show his unique and laudable cultural sensitivity, said, “So, since you have your freedom…”

I lunged at him at said, “NO!” We hustled out of the bathroom and I pray she didn’t hear him.

And that’s the story of why I don’t go to the Cracker Barrel any more.

I’m kind of looking forward to these days; is that wrong?

Tell us your most embarrassing kid moment down in the comments!